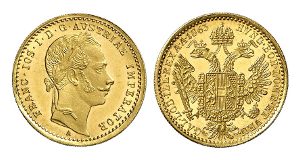 In 1273, King Rudolph I became the first representative of the Habsburg clan who ascended to the Roman-German throne. It began the reign of the Habsburg dynasty, which lasted until the reign of Charles I (1916-1918), the last emperor of Austria.
From 1438 until the fall of the empire in 1806, almost all German kings and Roman-German emperors came from the Hapsburg clan. Thanks to the skillful marriage policy, true to the motto “Motto Bella gerant alii, tu felix Austria nube” (“Let others wage wars – you, happy Austria, marry”), from the Middle Ages until the New Age, the Habsburg managed to create a network in Europe dynastic ties that, among other things, provided them with rule in regions such as Bohemia and Hungary, Spain and Portugal, as well as in Milan and parts of Lombardy. As a result, the Habsburgs had a decisive influence on the monetary and monetary history of Europe in modern times. known As the Austrian Dynasty (Casa de Austria), such famous names as Charles V (1519-1558), Leopold I (1657-1705), Maria Theresia (1740-1780) and Franz Joseph I (1848-1916).
The oldest coins of the Habsburg era are coins of margraves and dukes of Austria, minted in the 12th century. During the reign of the Archduke Sigismund “Rich” (1446-1496) in 1486, the first Austrian thaler coins (guldiners) were minted in Tyrol. From the point of view of monetary history, with the introduction of the 16th century Coin Statutes, the division of the Roman-German empire took place: thalers became common in the northern lands, and guilders in the southern lands. In the south, the currency of the Habsburg possessions acquired the role of a monetary sample, which was intensified by the rivalry of Prussia and Austria in the XVIII-XIX centuries.
In 1750, Austria reformed its monetary system by establishing a 20-gulden monetary foot, conceived as a retaliatory measure against the Prussian 14-thalero foot (“Graumann’s monetary foot”). On September 20, 1753, on the basis of this foot, the Austrian monetary convention was entered into with the elector of Bavaria and the convention thaler began to be issued. On the very imprint of the Habsburg coins, the inscription “CONVENTIONSMÜNZE” indicated the content of the precious metal. Also, the denomination was indicated by the number “X” or the inscription “ZEHN EINE FEINE MARK” (10 thalers equal to 1 brand Cologne with a net metal content, weighing 233.856 g).
After August 6, 1806, Franz II (1792-1806) abdicated the Roman imperial crown, Austria’s influence on the German monetary business was reduced. The Vienna Agreement, signed on January 24, 1857, became the last significant agreement with the participation of Austria. The main weight unit for the countries participating in the convention instead of the Cologne mark was the “pound of the customs union” (metric pound), equal to 500 grams. From now on, 30 thalers were to be minted from one pound of silver in the north of Germany, and 45 guilders of the Austrian currency in the south of Germany, or 52 ½ guilders of the South German currency. As a result of the convention, the following relationship was established: 2 Prussian Thaler = 3 ½ South German guilders = 3 Austrian guilders. After the signing of the Vienna Monetary Convention, ducats, introduced in 1857 by decree of the emperor as a trading gold coin, became invalid the following year, but it continued to be minted in Austria until 1915.
After the Prussian-Austrian War of 1866, Austria and Liechtenstein left the German Union and the Vienna Convention, and the history of the moneymaking of Austria-Hungary began its own way. The main currency introduced in 1892 was the golden krone, equal to 100 gellers. By the 60th anniversary of the reign of Emperor Franz Joseph (1830-1916) in 1908, a magnificent Austrian special coinage was issued (100 kroons “Austria in the clouds”), which was so popular that it was minted in subsequent years. In 1915, the minting of Austrian gold coins of 20 and 100 kronor was stopped due to the outbreak of the First World War.
Get to know the history of one of the most significant European dynasties of the rulers, captured in coin images.