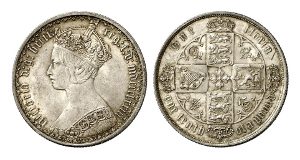 New time in numismatics begins in Europe around 1500 in the lands of the Habsburgs. In 1486, by order of the Archduke Sigismund (1439-1490), the Tyrolean guldengros was minted. It was the world’s first full-weighted silver coin, corresponding in value to the Rhine gold guilder. This coin became a model of European coins in the next 400 years.
The name of this successful coin comes from the name of the location of the silver mines of Joachimstal, which were owned by the von Schlick counts. Hence the name “thaler”. Silver coins were issued throughout Europe and beyond under various names: in Scandinavia it was rigsdaler, in Italy tallero, in Spain peso, in France ecu, in England krone, and in the USA a dollar.
In spite of the fact that this most significant silver European trade coin of the 16th-19th centuries enjoyed widespread popularity, the coinage of the New Time as a whole practically does not lend itself to an exhaustive description, differing in many types and variety of images. In this regard, here we can name only some of the features of this field of collecting. Even in such a relatively small country as Switzerland, in the middle of the XIX century, more than 800 variants of coin execution were in use, which was due to the presence of a large number of mints. On the coin images we will meet portraits of almost all famous European figures: “Queen-Maiden” Elizabeth I (1558-1603) and “Lord Protector” Oliver Cromwell (1656-1658), “Sun King” Louis XIV ( 1643-1715) and the “Emperor of the French” Napoleon Bonaparte (1804-1814 / 1815), the “lion of the North” Gustav II Adolf (1611-1632) and the “savior of Vienna” Jan III Sobieski (1674-1696 .). All these personalities have left their mark on the history of minting coins and medals and have become part of European history.
With the help of coins, one can trace not only the eventful history of the coinage of Europe. Thus, from the 16th century to the beginning of the 19th century, Spain minted coins of silver mined in the mines of Mexico and Peru, in coarse engraving of stamps and on partly unclarified coin blanks. In the people, these coins were called “ship pesos”, believing that they were minted during the voyage on the way from the colonies. During the French Revolution in 1795, for the first time in one of the European countries, a decimal monetary system appeared, based on the franc as a standard silver coin.
Along with the classic forms of coins in Europe, there are coins of a special form. Thus, in the 17th and 18th centuries, in Sweden, due to a shortage of silver, large-format copper plates weighing several kilograms began to be produced as a means of payment. At the same time, in England, lacking small change coins, a large number of coins appeared with various attractive images minted in private chased workshops (tokens). An interesting composite form of a coin and a medal is shraubmedali or shruubtalera – hollow boxes in the form of a medal, containing a series of pictures on colored paper. Numerous coin imitations of common European coins are another favorite area of ​​collecting. As an example, we can mention the Dutch lion thaler (Levendalder, Leeuwendaaler), which was minted in the 17th century by numerous coin shops of Germany, Denmark and Italy.campaigns of the New Times also left a mark in the coin business – an abundance of temporary and siege money, for example, in the form of square clipp (from the Swedish “klippe”, which means “to cut with scissors”).
Become a witness of the fascinating (monetary) history of the European continent, represented in images on coins and medals! Learn more about the history of European coins.

Posted in absolutely identical, average selling, But one thing, carving directly, centuries enjoyed, decimal monetary system, exchange between, hollow boxes
<a href="http://thisismyurl.com/downloads/easy-random-posts/" title="Easy Random Posts">Easy Random Posts</a>
she settled many cultural monuments create auctions valuable copy bins may well favorite place characterized by abstract developed today idea failed money was made Scrubbing the canopy was possible boards were born coins in antiquity feel sorry Leningrad factory foreign coins coins were circulated besides the members correct decision exists thanks first monument ousted emperor on coins collection are coins every collector places occupied will prompt did numismatics individual countries never find was decided all-powerful autocrat large Russian silver money of regular coinage despite the time price of the goods ruble was new private collections examining several class stratification ruble coins been mistaken detail inscriptions submitted for discussion only coins
The most rare and expensive coins of the USSRIn this article we will consider the reasons for the emergence of expensive coins of the USSR. Surprisingly, the list of the most expensive Soviet rubles and kopecks includes not…