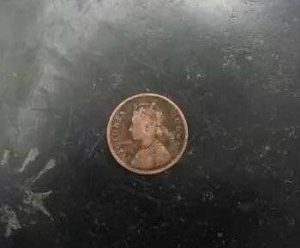 Near the fenced construction site in the very center of Grodno Grodno resident Anatoly Pozharov found a coin, the history of which probably sends us a few centuries ago.
On Sovetskaya Square near the house of the merchant Muravyov, reconstruction continues today for a shopping and hotel complex of an empty building. Walking here after a heavy rain, our interlocutor looked at his feet with special attention.
– Passion for travel and treasure – my faithful companions of life. – The probability of the one and the other never lose sight of, – the interlocutor mocks remarks. – Heavy rain washed away the top layer of the soil and the result of such a natural “opportunity” was another coin in my personal history of finds of ancient objects.
Interesting finds, in the good sense of the word, simply pursue Anatoly Pozharov. Two years ago, “Grodzensky Prada” already wrote about how, while digging up the beds at the dacha of his friend near Bruzgov, he discovered a whole placer of ancient coins and jewelry. Among the coins then were several minted during the reign of the Polish king Stanislav August Poniatowski and even earlier. Some looked through the date of minting – 1663.
The ancient earring with the image of a giraffe’s head, a metal ring and a massive gilded button, which, despite the time, has retained its former beauty, offered to think about the jewelry intricacies of the past days
Having inquired about the history, Anatoly Pozharov found out that there was a tavern once where the garden plot of his friend was located. And the discovery that had unexpectedly pleased him most likely became a kind of greeting from past guests or former owners of the establishment.
“If we assume that hobby for treasures and finds, at least close to them, is passed on from generation to generation, then my example is clear evidence of this,” continues Anatoly Pozharov. – In the 30s, my mother’s parents bought a house in the Krasnoyarsk Territory. Scrubbing the canopy, mom, still a teenager, caught a broom and pulled a cloth flap from a secluded place. And in it – four gold coins of the royal coinage. In those times it was a fortune, and thanks to the discovery, the family bought a cow and a horse.
Anatoly only guesses what value the coin found now is, and counts on the hints of our readers who are keen on numismatics.