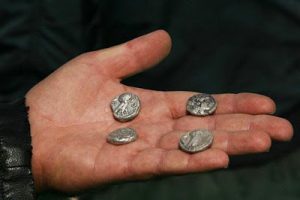 In the new history there are many anniversaries, celebrations, coronations, which you can almost always find out by looking at the coins issued in honor of this event. A Soviet soldier with a rescued girl in his arms tells about the feat of the people who defeated fascism; Mount Fuji and the intertwined five rings speak of the XVII Olympic Games; the bald Franz Josef recalls the longevity of his reign in the patchwork of the Austro-Hungarian Empire.
Many events were marked by the release of commemorative coins, which, unlike the medals, were endowed with a certain coin standard and nominal value.
Commemorative coins are a kind of popularizers of parades, reignings, victories and jubilees that went down in history. If medals are deposited in someone’s tables or on relatively rarely worn parade uniforms, the coin, as a means of payment, passes from hand to hand. At the same time, the inscription or image on the commemorative coin is read and scanned by hundreds of thousands and millions.
Not! A commemorative coin is not only an indifferent witness of historical fact. She agitates, inspires, makes you wonder!
This was well understood and Russian courtiers. That is why Russian commemorative coins were called upon to glorify the symbols of the “unshakable” imperial power: scepter, crown, and throne. The first Russian medal coin appeared in the reign of Nicholas I. Europe at that time experienced a heavy rampant reaction. The princes of the smallest states of Western Europe, who had not yet recovered from the upheavals of the Napoleonic wars, hurried to perpetuate themselves, their wives and daughters in profile and full face on hundreds of patient coin obverse. It seemed to them that by doing so they asserted their power, which every now and then they strove to overthrow the unconquered peoples, despite the efforts of the Holy Alliance, established in Vienna in 1815.
“Returning from distant wanderings,” Prince Gagarin brought a series of Bavarian medal coins to Russia. They were seen by Count Kankrin – Minister of Finance. After thinking about the minted pictures, the stupid count realized that if you change some of the images … In September 1835, it was ordered to urgently and very secretly make a stamp for stamping a ten-petitioner, on one side of which were depicted Nicholas I, and on the other – a queen with children.
Cutting the stamp was entrusted to the famous engraver, Professor Utkin, and since there were no portraits at hand, it was decided to copy them from Prince A. Golitsyn’s “loyal” snuff box, which contained snuff under the heads of the royal family.
Here I had to worry about Count Kankrin: what to write on the coin? “The blessing of heaven” or the “blessing of God”? Where to cut the year of the coinage and the dignity of the coin, when the whole monetary circle is occupied by the heads of the Grand Duchess and Princes.
The first embarrassment turned out when Nicholas I considered the coin. In general, Nicholas I was extremely intolerant of attempts to depict him on coins. On the medal still all right, but so that the commoners could feel his dignified head with his hardened fingers? Nicholas I could not agree to this!
What did Count Kankrin do to overcome the prejudice of Nicholas I to the image of his person on the coins! In all the loyal reports, the cunning Minister of Finance emphasized that these “family” coins would be for the emperor’s personal use. It changed things. The sovereign was flattered. In the end, some senator’s well-groomed hands, holding a gift coin with reverent respect, are not peasant fingers. But then it turned out embarrassment! Whether the images of august persons on the prince Golitsyn’s snuffbox were dubbed, or for another reason, but in the cast of a coin, Nicholas I recognized himself with difficulty and ordered the stamps to be cut anew. Two months passed and at the end of 1835, 36 coins in denominations of 10 zlotys, or 1.5 rubles, were presented to Nicholas I for “one’s own use.”
This time, Nicholas I, after examining the coins with some irony, remarked that his august husband looked like the late empress. Redo! Portraits fix! Without the highest permission not to distribute!
Nicholas I was impolite not only with his valets.
Three more months passed. At this time in February 1836, 50 coins, minted with a new stamp and polished, sparkled in front of the all-powerful autocrat. Nicholas I, finally, was pleased. He left 30 pieces of one and a half ruble for himself for distribution, and sent 20 to the mint. After some time, another 50 family ten-killers were made for the personal use of Nicholas I.
A coin minted on one version of the stamp in 36 copies, and on the other in the amount of 100 pieces, promised to be extremely rare. Moreover, she settled not numismatists.
But ten years later, in 1847, to the obvious displeasure of Nicholas I, it turned out that the heads of the mint had slowly given permission for the minting of a family ten-petrol for curious nobles. Once again, the autocrat issued an order to ban the minting of a coin without his permission, and this time finally.