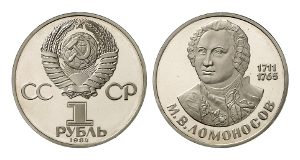 The history of Russian coins is still relatively short. In its development, the monetary business of Russia did not directly rely on ancient or medieval designs, and yet in an amazingly short time it reached such a level of diversity and beauty that collectors quickly become fascinated with striking images on coins and medals, as well as large-scale gold and silver minting.
Whereas the money of many countries of the world, such as the American dollar, takes its name from the silver thaler, minted since the end of the 15th century, Russia has come a special way in the field of coinage. The name entered during the reign of Peter I the Great (1682-1725) in the turnover of the ruble comes from the old Russian word “chop” in the sense of “repelling”. This ancient name of Russian coins appeared even in those times when parts of solid metal bars were cut off to receive small means of payment. This name of the coins seems archaic, and the more surprising is the fact that the Russian monetary system became the first in the world, built on the decimal principle (1 ruble equals 100 kopecks). We still use this system, and its structure has remained unchanged for more than 300 years.
Even if the basic structure of cash was fairly simple, due to the need to provide a huge empire with money, a large number of very different types of coins and coin images were created, making collecting Russian coins a fascinating and versatile hobby. In the images of Russian coins and medals, the great sovereigns of Russia appear to us as living, and touching the history of Russia becomes possible in the direct sense of the word.
Various famous personalities and significant events of Russian history are captured not only by simple means of payment, but also by medals: starting with the 18th century Russian sea expeditions, continuing the battles of Russia with the Prussian king Frederick II and the emperor Napoleon and ending with impressive buildings of the industrialization era.
Thanks to numerous new publications – in many languages ​​and with extensive illustrative material – the novice collector can quickly plunge into the history of Russian coins and medals and, even without knowing the letters of the Cyrillic alphabet, find a piece of the “minted history” at home.