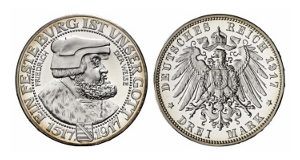 With the adoption of the constitution of the German Empire on April 16, 1871, responsibility for the currency of the empire passed from individual federal states to the government of the empire. Thus, it became possible to carry out long-overdue reforms on the establishment of a single system of sizes, types and weight of coins, the embodiment of which was the Reichsmark.
A mark (equal to 1/3 of a thaler in the north of Germany and 35 kreutzers in southern Germany) with a decimal division was adopted as a single nominal unit. One brand became equal to 100 pfennigam. Silver and gold coins were issued. The fact that 10 pfennigs were approximately equal to one penny, which explains the origin of the name of this coin among the people, was convenient for the account, as well.
As a symbol of the unity won during the Franco-Prussian war (1870–1871), a unified image was minted on Reichsmarks. On coins from 2 to 20 marks on the obverse, the imperial eagle was struck, indicating the year, the dignity of the coin, and the inscription “DEUTSCHES REICH” (German Empire). For the design of the reverse Reichsmarks were responsible local landowners (for example, Bavaria, Prussia, Saxony or the free city of Lübeck). The volume of coins produced depended on the size of the territory to which the respective mint belonged. Thus, Prussia produced much more coins than, say, in the duchy of Oldenburg or Saxe-Coburg-Gotha. Small coins were drawn up in the standard way, the denomination, the year of issue of the coin and the imperial eagle were minted on them. The name of the mints was designated on the Reichsmarks in the form of letters – according to the dynastic rank and antiquity of the dynasty, the representative of which belonged to the mint: * A = Berlin (emperor of the German Empire, king of Prussia), B = Hanover, C = Frankfurt am Main, D * = Munich, E = Dresden, F * = Stuttgart, G * = Karlsruhe, H = Darmstadt, J * = Hamburg (mints marked with an asterisk exist to this day).
After the fall of the Empire in the First World War and the proclamation of the Weimar Republic, the time of the noble territorial states ended, and the currency of the empire was again unified. Catastrophic inflation of 1920-1923 It was suspended with the introduction of a rental mark on October 15, 1923 (1 rental mark corresponded to 1 trillion paper marks). A year later, on August 30, 1924, the Reichsmark (RM) was reintroduced, which was in use until 1948 in parallel with the rental mark.
After World War II, on June 20, 1948, currency reform was carried out in the three western occupation zones. In the “Bank of German Lands” 100 Reichsmarks could be exchanged for 6.50 German marks (DM). The currency of the Soviet occupation zone was also first called the “German mark”, since 1964 it has been renamed the “mark of the German issuing bank” (MDN), and since 1968 it has become just the “mark” (M). After the eventful era of the Reichsmark circulation on January 1, 1999, with the introduction of the euro (EUR), a new chapter of monetary history began. At the beginning of its circulation, the euro was used only for cashless payments. On January 1, 2002, the euro was put into cash.
The rich history of changes in Germany of the 20th century gave rise to many types of coins, as well as temporary, commemorative coins and their substitutes. In this area of ​​collecting you will find a wide variety of coins, to get acquainted with which in view of the availability of extensive literature is not difficult. In connection with the fact that at the end of the 19th century, machine-minting of coins was introduced and their individual types were produced in large quantities, the slightest nuances of the degree of preservation are of great importance for determining the price of Reichsmarks. Another favorite area for collecting German coins is trial coins containing curious coin images of famous artists and not drawn into circulation. If there is interest, the collector can supplement his collection with paper money of individual German states or investment gold coins of the Federal Republic of Germany.

Posted in absolutely identical, average selling, But one thing, empire was, western occupation zones
<a href="http://thisismyurl.com/downloads/easy-random-posts/" title="Easy Random Posts">Easy Random Posts</a>
submitted for discussion private collections first monument detail inscriptions boards were born characterized by abstract never find all-powerful autocrat exists thanks was decided will prompt ruble coins was possible Leningrad factory favorite place developed today create auctions coins in antiquity money of regular coinage idea failed feel sorry coins were circulated large Russian silver ruble was new examining several only coins bins may well every collector price of the goods class stratification collection are coins foreign coins money was made she settled did numismatics ousted emperor on coins despite the time been mistaken besides the members Scrubbing the canopy individual countries valuable copy places occupied correct decision many cultural monuments
Commemorative coinsIn the new history there are many anniversaries, celebrations, coronations, which you can almost always find out by looking at the coins issued in honor of this event. A Soviet…