Numismatics is one of the most famous and ancient types of collectibles. 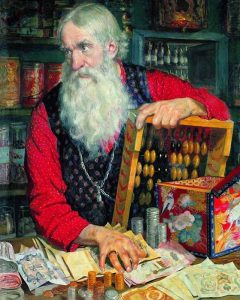 Numismatics (collecting coins and medals, including the study of money circulation and the history of coinage) is one of the most ancient types of collectibles and is probably one of the most popular modern areas of collecting and private investment. Numismatics allows in practice not only to devote your time to an interesting hobby, but also to receive income from investments, to study history (including the political and economic history of society, the history of issuing money), geography, art, foreign languages, changing state symbols, archeology and other interesting subjects, which open up to the novice collector a completely new world of knowledge and time of transmission for him. Many coin collectors collect coins and desktop medals at the same time as coins, since they are very similar to coins, so collecting memorabilia and payment tokens, desktop medals is the closest to numismatics theme of collecting.
19th century coin collector As a rule, tokens and collection medals are cheaper than the most valuable coins, but at the same time they are less systematized, which is of particular interest to research from collectors. Other collectibles related to numismatics are also quite popular among collectors — bonistika (collecting and exploring out-of-circulation paper money), scripophilia (collecting securities that have lost their value (stocks, bonds).
Coins are made from various metal alloys, as well as from precious metals (silver, gold, in rare cases – platinum and palladium), as well as rarely used valuable metals (titanium, niobium, etc.). Coins made of precious metals are popular with collectors and private investors, but unfortunately many collectors, for financial reasons, cannot afford to collect coins made of precious metals, so they collect more affordable and less expensive coins from alloys of ordinary metals. As a rule, coins have a round shape, but can also be polygonal or have a different non-standard shape.
The weight of a coin is measured in grams or troy ounces (the standard of mass of precious metals generally accepted in the world is 31.1 grams). Some states do not have their own mints and order the minting of their own coins in foreign mints. For many small countries, the production of collectible coins is a significant source of income.
According to various estimates, there are about 120-150 million coin collectors in the world, in Russia at least 20-30% of all collectors are coin collectors, about 50 million people collect coins in the United States. All new and new numismatics lovers choose to collect rare coins as a hobby and investment, as this is probably one of the most liquid collectibles markets. In addition, numismatics is a very compact type of hobby, since little space is needed for storing coins, which is very convenient for collectors. To store even a large collection of coins, one or several bank cells are sufficient.
A huge and every year more and more growing number of people keen on numismatics, almost guarantees a gradual increase in the price of coins. In my opinion, numismatics is the most transparent in terms of pricing direction of collecting. A large amount of well-cataloged information on coins, numismatic directories available to the common man (with information on release years, circulations, prices), many sources of purchase and options for selling coins allow collectors and private investors to make well-considered and weighted decisions about buying or selling coins.
Coin prices depend on many different factors, but probably the main ones are the rarity, popularity and safety of the coin. Before you start collecting coins, you need to get as much information about this type of collectibles as possible, including it is recommended to purchase relevant literature on numismatics, catalogs of coins of the world or individual countries in print or electronic form.
The turnover of coins in the numismatic market is quite high: a significant part of the coins returns to the market after some time and changes owners. This is largely due to the fact that a very large number of collectors are keen on numismatics, and investments in coins are quite liquid. For the last fifteen years, collecting coins has been actively developing in developing countries, as the middle class grows and the number of the rich increases. In Russia, operations in the numismatic market are estimated at approximately $ 1-2 billion annually. Unfortunately, the growth of the numismatic market in Russia significantly slows down postal restrictions on the shipment of collection coins. I dare to suggest that in the near future such restrictions will be largely lifted.

Posted in able to sell, absolutely identical, average selling, business associated, counterfeit coins, for financial reasons, quite popular among
<a href="http://thisismyurl.com/downloads/easy-random-posts/" title="Easy Random Posts">Easy Random Posts</a>
never find developed today besides the members many cultural monuments coins were circulated Leningrad factory will prompt first monument foreign coins places occupied create auctions was possible submitted for discussion ruble coins detail inscriptions collection are coins large Russian silver money of regular coinage bins may well class stratification was decided characterized by abstract favorite place feel sorry idea failed coins in antiquity examining several she settled private collections correct decision price of the goods despite the time Scrubbing the canopy only coins did numismatics individual countries valuable copy been mistaken money was made boards were born every collector exists thanks all-powerful autocrat ousted emperor on coins ruble was new
What is the cost of silver coins of Tsarist RussiaWe can safely say that silver coins of tsarist Russia of 1700 - 1917, will definitely be able to delight everyone, even the most fastidious and demanding coin collector, otherwise…