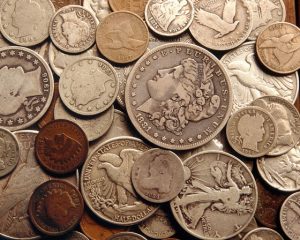 The Russian Empress Elizabeth did not think that a number of her decrees, by which she had eradicated a relatively common coin, would make this coin a numismatic rarity.
However, in order.
After the death of Anna Ioanovna in 1740, a three-month baby was raised to the Russian throne under the name of John III.
Since Ivan Antonovich couldn’t show any particular political activity at this age, Biron was appointed regent of the empire, and then, as a result of a palace plot, the mother of John Antonovich Anna Leopoldovna.
While the palace passions were raging, there was no talk of coins with the name of the autocrat of the breast autocrat, but excitement subsided and at the end of 1740 several test coins with the monogram of Emperor John were presented to the senate. One could understand the confusion of officials from the monetary redistribution.
By tradition, large silver coins were depicted by autocrats, but how to convey the portrait features of the Highest, if the attributes of his power were not a scepter and a crown, but a nipple and a pot. So a few coins were made not with a portrait, but with John’s monogram. But the Senate did not allow them to be released into circulation. On 30/1 of 1741, an order was given to mint silver coins with a portrait of John, pointing to the place of chasing – the Moscow Mint or the St. Petersburg.
An energetic search for artists began, with the result that an image of a puffy young man with a laurel wreath on his head appeared on silver coins. If the carver showed more forethought, he would have replaced a wreath of laurel with myrtle. But … at the beginning of 1741, the minting of 6 thousand rubles began at the Petersburg Mint. They were minted on previously prepared circles in the reign of Anna Ioannovna, so for this lot of rubles the herd was with an ornamental notch, and not indicating the St. Petersburg Mint, as minted the bulk of the rubles of John.
At the Moscow Mint events unfolded somewhat sadder. In March 1741, one of the temporary painters Minikh wished to personally get acquainted with the future production of the Moscow Mint. One of the two trial tenants sent by Minikh, to the great embarrassment of the officials, deigned to put them in his pocket.
… Here we will stop for a minute and say that Minich can be excused for abuse of his official position, given that his rival A. I. Osterman had about 2,000 coins in his munch office. So could Minikh resist the temptation to get a coin that Osterman could not have?
After this unexpected event, Minikh said that he did not like Rublevik very much: Emperor John looked very elderly on the coin, his chest was low, the order that the reigning persons were awarded from the cradle did not wear on the dress and, finally, there are no letters M. MD, from which one could judge that the coin was minted at the Moscow Mint.
Why do you need to emboss the letters of the mint on the legend, if the link to the place of minting is already on the edge, it is not entirely clear, but if the temporary worker wanted to become the owner of a single coin, he could find fault with anything.
So at the Moscow Mint, John became younger, and with a chest wheel, and with an order on his neck. He was so accustomed to the fictional portrait that when Prince Myshetsky, who worked on the book The Power of the Russian Empire, needed an image of John III, he was given such a ruble for the sample.
On November 25, 1741, a regular palace coup took place and Elizaveta Petrovna became the empress. First of all, she sent John III with her relatives into exile, and then sent his relatives abroad. As for the former sovereign, who had hardly learned to walk by that time, the sad fate of the Russian “iron mask” – the life imprisonment in prison – waited for him.
True, in her New Year’s nominal 1742 Decree, Elizaveta Petrovna reported that she also sent John III abroad, but who could blame Her Majesty for lying? All this is done in the reasoning of the highest thoughts and state necessity. Further from the general phrases about Prince John, Elizabeth Petrovna got down to business.
In the same decree, it was strictly prescribed to “all our loyal subjects” to immediately exchange the silver coin in their possession of the image of Prince John for the coins of the new product until January 1, 1743, and after that period it was forbidden to accept the coin with the portrait of John.
For all her ignorance, Elizaveta Petrovna understood the agitational character of the image of the ousted emperor on coins. As long as the hands of merchants, soldiers, peasants, noblemen will sort out coins with a portrait of John, who is called them the autocrat of all Russia, thoughts of not only the illegality of her reign, but — oh, horror — and about the fragility of the places occupied by sacred imperial persons.

Posted in average selling, boyars who looked, church riches from, Coins of ancient, official position, officials from, put them in his pocket
<a href="http://thisismyurl.com/downloads/easy-random-posts/" title="Easy Random Posts">Easy Random Posts</a>
first monument Scrubbing the canopy was possible money was made did numismatics individual countries favorite place boards were born detail inscriptions valuable copy every collector feel sorry correct decision been mistaken examining several money of regular coinage despite the time characterized by abstract only coins many cultural monuments foreign coins all-powerful autocrat besides the members Leningrad factory ruble was new never find she settled bins may well was decided private collections submitted for discussion coins in antiquity create auctions collection are coins places occupied coins were circulated exists thanks class stratification large Russian silver will prompt ruble coins ousted emperor on coins price of the goods developed today idea failed
Greek coins (VII-II century BC)In ancient Greece, the fundamental foundations of the development of European civilization were laid. The cultural achievements of the “classical time” (ca. 500-363 / 323 BC) include not only the…