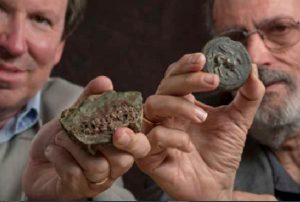 The whole history of numismatics is a kind of struggle with various fakes and other types of falsification. Even novelists, going from hands to hands of collectors, out of ignorance or for other reasons, begin to be called originals. Counterfeiters resort to all sorts of tricks to make the coin look like a script.
Counterfeiting is not to be confused with the falsification of collection coins. If in the first case the falsifier forges a collectible, in the other case the object of falsification is the means of payment. There are a lot of very experienced coin collectors, who chose the fake coins of different countries and peoples as the theme of their collecting. This is a very interesting profile of gathering, allowing to know the economic life of the state, the degree of technical equipment of counterfeiters, their mistakes, methods, the metal to which they resort to forge coins. In vain, some believe that this is of narrow criminal interest: the study of counterfeit coins is the same story of financial relations in society, without which knowledge of history is unthinkable.
Falsification of ancient coins dates back to the Middle Ages. Someone Kaviro Kavinus (XVI century), being engaged in numismatics, at the same time cut stamps of rare Roman coins with which he minted coins, and taking advantage of them among numismatists, sold them their products.
He was a native of the Italian city of Padua, and desecrated his hometown by the fact that for a long time the fake coins were called “Paduans”.
Ways of fakes, forms of fakes and type of fakes of coins among the forgers were very different. One of the Syracuse sculptors Michelangelo Paliti was selling the “ancient Roman coins” with the image of … Napoleon I. To the French and the British, Napoleon was depicted on the coins in the manner of the Roman emperors to a great extent.
In collectors, quite often you can find the so-called “pork fake.” On one side of this obscure artwork, a method of very rough etching or carving directly over a coin mug depicts a lofty old man with a tiara or crown on his head with an inscription in Greek: “Bazileus Seleucid.” On the other side is a herd of pigs, which some consider to be elephants. But since the author of this type of coin did not explain what was depicted on the coin by talent or by written explanation, incomprehensible animals belong to the breed of pigs.
And very high-ranking aristocrats did not disdain to stain their hands with antique fake coins. Somebody Karl Becker, a corrugation of the principality of Isenburg, in the 30s of the XIX century produced 622 stamps for counterfeiting antique coins. He made his coins from old coin circles, but in order to confuse the buyer and give a fake coin a shade of use, he put them in a box attached to the back of the road crew. In this box, he put the mixture, in which there was a lot of iron filings, and for long months, traveling kept in this mixture forged coins. In the late 18th and early 19th centuries, forgers began to fool coin collectors in Russia. One of the first to emerge was the unique golden mozhaysky money, which the antiquarian-falsifier
Shukhov managed to sell such an experienced, but keen collector, as Lysenko. Shukhov’s son sold Lysenko a coin of Vasily Dmitrievich, which he in turn sold to Stroganov. After this transaction, Lysenko’s reputation was greatly shaken.
At the beginning of the 20th century in Alexandropol (now Leninakan) it was possible to purchase gold coins of Tigran Armenian, perechekannye from Russian five-ruble gold coins.
Let us dwell on some coins that were invented by antique dealers for sale to credulous collectors. Remember in the novel “Peter I” by Alexei Nikolaevich Tolstoy, the description of the first meeting of the later powerful Russian temporary worker Menshikov with Peter!? “… Alexashka picked up the abandoned ruble on the fly … The ruble was new, – on one side – a two-headed eagle, on the other – ruler Sophia.”
Menshikov could not hold the ruble in his hand, could not see the image of Sophia for the simple reason that such a ruble did not exist in nature.
The ancestor of the Russian ruble, first minted in 1704, is considered to be Peter I. (Not counting Alexei. Mikhailovich).
But how could the ruble with the image of Sophia fall into the hands of Alexashka?
The novel by A. N. Tolstoy in the descriptions of battles and public relations of the Petrine period was extremely documentary. And if the writer could have been mistaken in determining the value of the coin, then he could not unreasonably give the ruble the minted image of Sophia. It must be assumed that A. N. Tolstoy saw such a ruble from any of the numismatists.
In pursuit of profit, not constraining themselves within the framework of historicity, merchants near numismatics generously made coins.