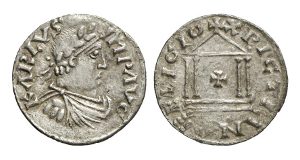 Medieval coins (ca. 500-1500)The Middle Ages spanned 1,000 years of European history, starting with the earliest chased coins of the German successor states of the Roman Empire during the Great Migration and ending with the coins of Emperor Maximilian I (1486-1519), the “last knight”.
The Middle Ages opens up great opportunities for the collector. This area of ​​collecting includes interesting types of coins of the era, which laid the foundations of modern European monetary and monetary affairs. In addition, for many periods of medieval history, coins are often the only sources of records and images that convey to us, so to speak, first-hand information about the change of rulers, wars and weddings.
Around 800, Charlemagne (768-814) introduced monetary reform, as a result of which, in the era of the Great Migration of Nations, the monetary system of the Franks was organized in a new way. In its basic features, it has not changed for the next 500 years. The monetary system created by Karl provided for a single nominal value – a silver denarius; From one pound of silver (400 g) 240 coins of this denomination were to be minted. This coin was minted in a variety of different designs throughout Europe (pfennig in Germany, pennies in England, denier in France, denaro in Italy). At the time of the Hohenstaufen (XII-XIII century), denarius was minted in central Germany in the form of large concave pfennig with one-sided minting (bracteate). Sometimes extremely expressive images on the coin were made at a high artistic level. Since the rulers of the Middle Ages gave the right to coinage spiritual (episcopal and monasteries) and secular (duchy and county) institutions, this led to the fact that a large number of mints (in some periods their number was more than 400). Due to this fact, the collector of medieval coins can collect coins on a variety of thematic principles.
In the 13th century, gold was again used in minting coins. In the Italian trade republics of Florence, Genoa, and Venice, as a result of the need for larger monetary units, coins with denominations of florin, genovino and ducat (originally called tsechin) appeared. Together with larger types of silver coins, such as a penny (fr. Gros tournois, a tour penny), the coins of these denominations reached the North of Europe during the Middle Ages, where in subsequent decades they minted their imitation. So over time, differentiated monetary systems have emerged, including a wide variety of currencies, monetary types, and coins.
Exploring the various monetary images of the Middle Ages, immerse yourself in the days of Charlemagne (768-814), the Spanish reconquest (711-1492), Friedrich Barbarossa (1152-1190) and the centenary war between England and France (1337-1453). )!
Start collecting medieval coins today!