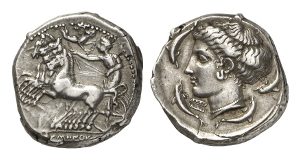 In ancient Greece, the fundamental foundations of the development of European civilization were laid. The cultural achievements of the “classical time” (ca. 500-363 / 323 BC) include not only the formation of Athenian democracy, but also monumental buildings (the Acropolis), important historical documents (Herodotus), and large-scale sports events (Olympiad), relevant to this day.
According to the Greek historian Herodotus, the coins were invented around 650 BC. the people of Asia Minor Lydians. They turned out to be a practical means of payment, the content of the precious metal in which was guaranteed by the state. The first coins were made of electrum, a natural alloy of gold and silver, and had the form of lumps with a stamp of the simplest images. The proliferation of these coins during the 6th century in the Mediterranean was promoted primarily by the entrepreneurial spirit of the Greek merchants. The first Greek silver coins were issued on the island of Aegina. They depicted a sea turtle, the symbol of the god of the seas, Poseidon. In general, for Greek coins, as a rule, images of deities of the respective city-state or figures having a mythological connection with them are typical, for example, an owl on Athens coins, pegasus on Corinth coins, a maze on Crete coins or a bee on Ephesus coins. Images of Greek coins made by famous coin cutters, such as Cimon, Euclid, or Eugenet Syracuse, are most often distinguished by their excellent quality and appealing naturalism. These are real small works of art of the ancient time, inscribed in the format of a valuable Greek coin.
The symbols of the value of the coins served as indications of weight, as well as indications of the unit of account and monetary unit. Due to the diversity of the Greek city-states, one drachma could have different weight in different cities. The most common in Greece was the Attic drachma, which weighed about four grams. According to the information that has come down to us, as early as 593 BC. monetary reform was carried out in Athens, during which the statesman Solon put into circulation the tetradrachm (equal to four drachmas). Large monetary units (Multipla), multiple to drachma, respectively, are called didrachm (2 drachmas), pentadrachm (5 drachmas) and octodrachm (8 drachmas).
During the reign of Alexander the Great (336-323 BC), the Greek monetary system was systematized and unified in order to meet the needs of the empire for money. The Macedonian coins of the Hellenistic era (336–30 BC) depict the head of a young Hercules with a lion skin. Alexander’s successors (the so-called diadoches and the states formed by them) at first minted coins without changes, after which they proceeded to create their own images, and portraits of rulers first appeared on Greek coins.
The expansion of the Roman Empire put an end to the independent Greek monetary business. In 146 BC Greece became a Roman province (Macedonia). The place of the image of the local Greek gods and rulers gradually replaced the portrait of the emperor, and the Greek coins turned into coins of the Roman province.
Collect a collection of coins of ancient Greece and find a piece of European culture in your home!